Stepping Towards a Sustainable Lifestyle

It is up to all of us to take steps, no matter how small, toward making the planet cleaner, safer and healthier, for us and for future generations.  Today’s article is about the miracle of light emitting diode (LED) technology.  This article, as well as all other articles sharing practical tips, are filed on our website (yorktown100.org) for future reference.

Do you know that a LED light bulb can last for over seventeen years without having to be changed, or that over its lifetime it costs only 15% of the equivalent incandescent bulbs it is replacing?  Lighting is something we all take for granted.  Flip the switch and we can work all night.  That wasn’t the case before the late 1800’s, when dim, dirty, and hazardous devices such as gas and oil lamps were used and before that, candlelight.  Besides easily starting a fire, carbon monoxide asphyxiation in poorly ventilated spaces was also an issue.  The advent of the incandescent light made life so much safer, simpler and extended our productive hours.  Fast forward to today.  Although the incandescent light was one of the greatest inventions, its two main disadvantages are poor efficiency and a short lifetime.  Ninety percent of the energy for these bulbs goes into heat (not light) and the lifetime is about ten months, if on for four hours per day, compared to the seventeen-year lifetime of an LED bulb.

Starting in the late 1970’s, a new revolution in lighting technology began with fluorescent lighting.  In the late 1980’s through the 2000’s, compact fluorescent (CFL) light bulbs were replacing incandescent bulbs.  The CFL provided more efficiency and a longer lifetime.  In turn this was replaced by the light emitting diode (LED) bulb, entering the market in the 2010’s, providing even more efficiency and an even longer lifetime.  The LED had additional advantages over the CFL, such as:

For these reasons CFLs are disappearing rapidly, with LEDs taking over the market.

From a homeowner perspective, the LED bulb is the best way to go.  They are now available in all shapes and sizes for all fixtures, with many color temperatures.  The small footprint of the actual solid-state circuit enables new shapes, such as on a strip (tape on lighting) and in a button (pinpoint lighting).  When choosing a bulb, pay attention to the color temperature.  Bulbs can be put in three broad classifications:  Soft White (i.e. mimics incandescent bulbs), which has a slightly more golden light that may seem more cozy and warm, Bright White/Cool White which is a purer white more toward the blue end of the spectrum, and Daylight (i.e. mimics sunlight) which may appear harsh. If you prefer the atmosphere of an incandescent bulb, and like the warm glow it emits when dimmed, there is also a bulb available that becomes warmer in color temperature as it is dimmed, simulating an incandescent bulb (the “warm-glow” bulb).  Note, that if you choose a bulb as “dimmable”, you may need to change your dimmer since LED lights take so little electricity.

The table below compares the different types of bulbs.  The LED is a homerun in terms of owner’s cost and saving energy for the planet.  Can you think of another item you buy that is over 85% cheaper during the useful lifetime?  Once you purchase an LED bulb, the payback period, or time to recoup your expense at which point the item no longer costs additional money, is less than three years.

These bulbs are truly a miracle – cutting costs dramatically and reducing energy use substantially.  Good for the pocketbook and the climate–a slam-dunk, win-win! 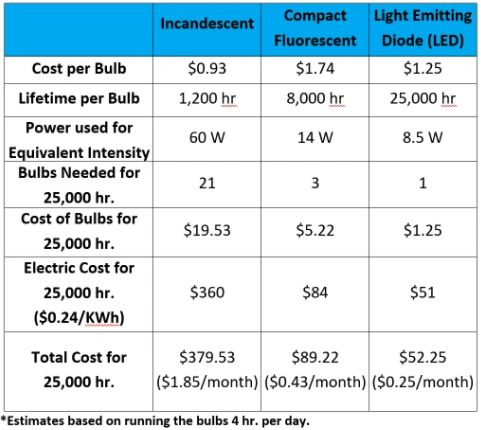 Yorktown100 is a 100% volunteer group of neighbors working together to reduce our carbon footprint by 5% a year through various initiatives.  Please contact us if you would like to learn more, or would like to join.  We welcome new members!  Visit us at https://yorktown100.org/ and help make a difference.